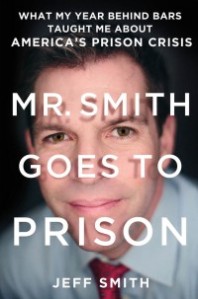 Jeff Smith was a state senator representing St. Louis until he was sentenced to prison for obstruction of justice in a campaign malfeasance case. His recently published memoir about his experiences in prison, Mr. Smith Goes to Prison: What My Year Behind Bars Taught Me About America’s Prison Crisis, offers a glimpse into the dismal state of rehabilitative education–and a good example of why getting books into the hands of people in prison is so important:

Many prisoners were anxious to learn how to operate, program, and fix computers, and dozens of prisoners had been requesting computer courses for years. So I was heartened to learn that the warden was requiring a new computer skills class for all prisoners nearing release. One day I was called to the admin building along with other prisoners in their final six months for the start of what I assumed would be a multiweek course of instruction. Two COs herded us into a computer room; one checked us off, and then we waited at the terminals for thirty minutes under his watchful eye. Shortly thereafter, the CO called roll and looked us over. “All right, it’s been about forty-five minutes, so you can leave if you want.” And thus ended our computer skills class. Nutrition class was similar: a CO handed out a brochure with information about the caloric content of food at McDonald’s, Bojangles, and Wendy’s and released us after five minutes.